Guys, go see Mad Max: Fury Road as soon as you possibly can, and then see it a second time This cannot afford to be another great action movie with an incredible story that lacks producer confidence because its box office numbers were too low. Comparative to its budget and critical reception, the money it made in its opening weekend given it’s hype and rabid fanbase was dismal, at best.

I saw it on Friday night with a handful of friends from the annual Wasteland Weekend festival (I made the official highlight reel for 2014.) and we were all utterly and completely blown away. Inside of a giant action blockbuster of flame throwers, bullets, and gallons of gasoline is a poignant tale of humanity, redemption, and hope.

I mean I really want to write a review about this movie, and there’s plenty better reviews that drive the point home and reviews that really examine the depth of the imagery, and I really don’t need to add one more to try to convince people to go because nearly every review is positive. I want to write about it, but this movie made me feel like a child who just saw something amazing and, in trying to get something coherent out, winds up babbling about six ideas at once, and after a weekend of trying to get something better down on a page, here’s my best shot:

The biggest question, what stops this entire movie from being another Post Plot movie, is the question “Are you a person, or are you a thing?” There’s the obvious look at women as objects in the film – the somehow divisive issue that women should have their own agency, represented by big bad Immortan Joe’s harem of sex slaves with names that describe qualities rather than people, such as “Splendid”, “Capable”, and “The Dag”. Furiosa takes it upon herself to get them out of Joe’s citadel. She starts the movie off admittedly not an object by the juxtaposition of her body being one with an object. Her prosthetic arm is, by my reading, a reminder that Joe (who, mind you, dehumanizes every person he is lord over, reducing the War Boys to hunting dogs, women to dairy cows, and his subjects to plants that he waters when they need it) thinks Furiosa is one of his most trusted imperators, but her status as his imperator is something easily removed, only worn when it needs to be, and not a part of her person.

Max starts as a living blood bag, complete with medical information written on him detailing his “Universal Donor” type O-negative blood, his two good eyes, and lack of tumors. Like a blood bag, he’s put in storage, and put out to hang as his blood is pumped into Nux. He’s haphazardly strapped to the front of Nux’s car when they go after Furiosa with little concern for his wellbeing – he’s just blood after all; he’s a gas pump to top off a War Boy that needs more fuel, and he’s high-octane mad dog crazy fuel, at that. He remains an object by not giving his name to anybody – Nux calls him Blood Bag and Furiosa calls him fool. Furiosa even uses Max as a bipod for her rifle when it becomes clear that Max is a terrible shot with it. So naturally, Max ends the movie by making a choice to give his blood to save her life and tell her his name. He’s shed his Blood Bag objectivity because this was his choice, his choice to give and his choice to trust.

And then there’s Nux. Nux is the foundation upon which this movie rests. Nux is the character with the most important arc in the story. A cancer stricken and slowly dying devotee of Immortan Joe, his only chance at salvation and to shed the pain of his existence is to die bravely in Joe’s service to secure his place in Valhalla. Nux fails this goal three times, and the third time in the presence of his God. He is broken and rejected by his master, and simply lays down on the War Rig to die.

And then Nux is saved by Capable. She listens to him and cares for him and he trades a master that demands he prove his loyalty for a woman that believes he can be good by himself. Look at how Nux changes, watch how his make up slowly wears off and he goes from a white faced, black eyed skeleton to a person with actual human blood under their skin and light in their eyes, hope that perhaps something can be salvaged out of the painful existence and world he finds himself in. See how his attitude changes when he goes from a death wish and a need to destroy to a desire to live and keep moving.

And then, right when you realize Nux has snuck up on your list of good guys, he sacrifices himself and turns his previously ferorous and fanatic cry for death of “Witness Me!” to a declaration of love, a final word before a sacrifice, and a challenge to make things right again.

Seriously. Look at the range of emotion in this single frame.

Hoult’s performance as Nux transforms the movie into something profound, into an emotional experience you never could have expected, from what looked like a popcorn devouring action flick, into the most real and human movie of this summer. The acting in general is fantastic on all accounts – Tom Hardy has porbably less than thirty minutes of dialogue in the entire film, I’m certain of it. Charlize Theron does more talking than Hardy, but the points in the movie where the most is said is when the actors say nothing. You can see the emotion in their faces, you can see tears and fatigue welling up in Furiosa’s eyes, you can hear the monologue complete with “is it all worth it” and “what if it doesn’t work” and “how do I keep going” but none of it is ever vocalized because it only takes one look at her face to see and realize all these thoughts. You only have to see how she walks toward the war rig at the film’s outset and how she speaks to the escorting War Boys that think they’re accompanying her to pick up fuel to know that Furiosa is fully aware of how dangerous what she’s doing is and to know that even though she’s not showing it, she’s fucking scared.

And that might be the most beautiful thing about Fury Road. It spends no time at the beginning telling you “Yep, we blew up the world, and this guy Joe rules this corner of it because he has water, and Furiosa is doing something risky, and Max has a dark past, and the War Boys are fanatically suicidal because they worship this God called V8 and want to go to Valhalla, and…”

There’s none of that. The most beautiful and wonderful thing about this movie from a film making standpoint is that it treats itself as a visual and sensory medium and shows you everything you need to know instead of telling it to you. There’s no starwars crawl at the beginning, and the brief voice over at the film’s origin point serves more to flavor Max than explain anything. The film expects you to be smart enough to figure out everything from what’s happening on the screen, and it succeeds at every turn.

Believe the hype, people. Fury Road is the best damn action movie to grace our screens in a long time. 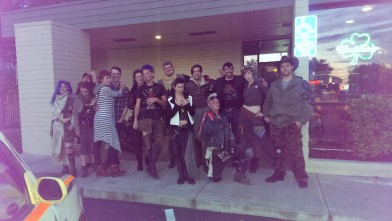 One response to “WITNESS ME: Mad Max Fury Road!”